Stock markets have been relatively flat over the last three months. The biggest news maker is obviously Greece. Being crushed under a humongous debt load of 451 Billion Euros owed to its Euro-zone partners, the Greek government decided to call a referendum so its people can decide whether to pay its creditors back. Surprise! They decided not to. Surprise again! They have done it 5 times since Greece’s independence 187 odd years ago. In fact, Greece has spent approximately half of those 187 years since it achieved independence from the Ottoman Empire in a state of default and therefore denied access to international capital markets – a position it is likely to resume in the very near future.

As the old adage says: “fool me once, shame on you; fool me twice, shame on me; What about “fool me five times…”???

Members of the European Union should have studied the Latin epic poem written by Virgil 2000 odd years ago: “Timeo Danaos et dona ferentes.” In English, it would translate into: “I fear the Danaans (Greeks), even those bearing gifts.”

Markets don’t seem to care too much about whether Greece stays or leaves the Euro zone. To put the whole situation into perspective, Greece is a country of 11 million people with an economy of $283 Billion, roughly 1.6% of the European Union’s economy of $17.6 Trillion.

The bigger risk is what will ensue if Greece obtains special treatment (i.e. a restructuring of its debt to a more manageable amount) whereas Ireland and Portugal paid the full price of austerity imposed by the same institutions; being the European Central Bank (ECB), the International Monetary Fund (IMF) and the European Commission (EC).

Speaking of austerity, here’s a famous quote from Winston Churchill….. 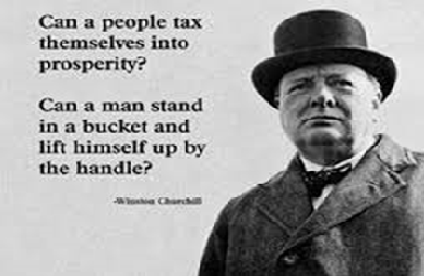 Over the past two centuries, European countries have tried to justify their currency unions without avail.

‘‘History doesn’t repeat itself, but it does rhyme!’’

As the S&P500 has climbed over 200% since the depressed levels of 2009, we think it is appropriate to address the notion of investment risk so our clients understand what we deal with continually in our duty to manage your money in a prudent way.

WHAT RISK MEANS TO US (CLARET)

Most academics and finance experts have brainwashed investors into believing volatility as risk, probably because it is quantifiable through statistical mathematics. However, the reality is that it falls way short as “the definition” of investment risk. We don’t think investors fear volatility. What they fear is the possibility of permanent loss of capital.

A downward fluctuation by definition is temporary and does not pose a problem if an investor can hold on for a recovery. A permanent loss is irreversible. We can ride out volatility but not a permanent loss.

HOW TO COPE WITH THE UNKNOWN

We don’t believe that the future can be predicted with any consistency given the infinite number of factors and randomness of the events that can influence it. Yet, investing requires us to position a portfolio for future development.

To cope with the unpredictability, we would like to emphasize the following two points:

Risk can manifest itself in very different forms: credit risk, concentration risk, illiquidity risk, leverage risk, funding risk, etc. Among them, most can be controlled (but NOT eliminated) by using discipline and knowledge. However, the following two warrant mentioning since it concerns most individual investors’ behavior:

As investment managers, we need to differentiate risk control and risk avoidance. Whereas the former is indispensable, the latter is not an appropriate goal: avoiding risk will also bear no return.

In order to know how to take risk appropriately, we need to know some of its characteristics:

In conclusion, let us repeat Charlie Munger’s comment on investing in general: “it’s not supposed to be easy. Anyone who finds it easy is stupid.” It definitely applies to risk management also. Believing risk control is an easy task is perhaps most dangerous since it creates a sentiment of excess confidence that makes investors do dumb things. A good dose of humility, modesty and knowing what we don’t know would be a good start in learning how to control risk.

As the Greek saga continues and the Chinese market takes a tumble, we think risk control is more important than usual:

We would also like to let you know that the federal government has increased the contribution level for TFSAs to $10,000. Those of you who would like to maximize your contribution, please call us and we will take care of it for you. For those of you who do not have a TFSA yet, you should have one since it is the only tax gift from the government that we know of with no strings attached.

Have a good summer.