Skip to main content
Home>Publications>Change is good! About Indexing… Volatility…

Change is good! About Indexing… Volatility…

We are sorry to report that the financial markets seem to disagree with the media assessment of President Trump’s popularity. Notwithstanding the fact that it is difficult to develop a liking for the US President, as investment managers we should not forget the main drivers of the capitalist system from his message and their effects on financial markets:

As long as the President can, even partially, deliver on the first two, the growth rate of the US economy does have the potential to grow faster than what we have witnessed the last 7 years. This is what the stock market seems to be telling us since November 2016. 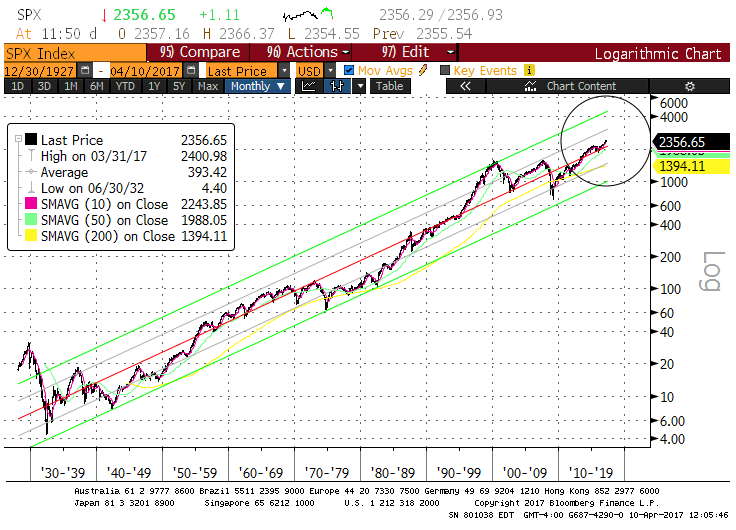 As you can see in the following chart (the zoom-in of the circle), we are slightly above the red line, which indicates a small overvaluation. If we check on our historical valuation metrics, although equities in general are fairly valued, they are not expensive relative to the low level of interest rates. 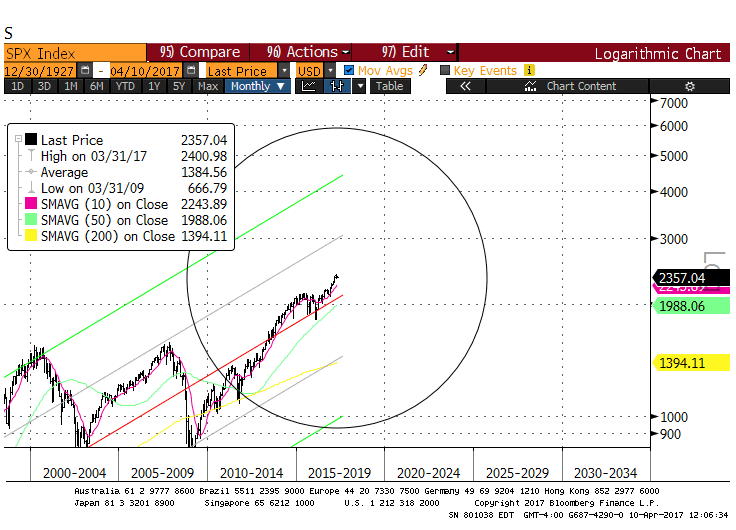 The effect of indexing, i.e. investors moving their money from the traditional mutual funds to indexed Exchange-Traded Funds (ETFs) has created one of the biggest challenges for investment managers. Money moves markets and the flood of money moving into the securities that represent the index has made them much more expensive than others: by definition, indexing means buying whatever is in the index, regardless of value. There are therefore two parts to the market: the indexed part that is quite expensive and the other that is relatively much cheaper.

Theoretically, the situation is a godsend for active managers who are supposed to have a big advantage over the indexes in times when the market seems to have a “split personality”. However, predicting when that happens is very hard.

At Claret, it is our goal to beat the benchmarks over the long term. To that end, we have to do things that are different than the market, which means our returns will not always closely follow those of the indices. It also means sometimes we are going to outperform, sometimes we are going to underperform. We try to stick to a disciplined and quantitative process of valuing companies that we can explain to our clients and ask for their patience.

Market volatility and investors follies, are they linked? Of course they are. If you look at the S&P 500 over the last 20 years, the index doubled from 1997 to 2000, then proceeded to lose 50% from 2000 to 2002; it then doubled again from 2002 to 2007 from which point it dropped more than 50% into 2009. It subsequently almost tripled from 2009 to today. It would be difficult to not conclude that people are a little crazy when it comes to their money. Intuitively, if one has a disciplined philosophy that takes advantage of the market extremes that are emotionally driven, one should be making lots of money. However, discipline and patience are the tough characters traits to master when trying to stick with a long term valuation process. Moreover, most investors and consultants don’t know what the process is, whether their managers stick to it because they don’t know the underlying thesis. What they all do is chase returns: checking the past short-term returns either through newspapers or the internet, taking money from the manager who underperformed to give to the one who outperformed in the most recent period. Notice that we use the past tense because performance can only be measured after the fact. It is tantamount to driving a car by looking at the rearview mirror...

Is the market going to have a meaningful correction (10-20%)? "We don't know" would be the honest, short answer. Somehow, we don’t think this is the comment you, as clients, are looking for. Let us put it another way:

There are 2 types of investor behaviors that are potentially dangerous for the health of your portfolios:

These behaviors will make one lose perspective and set one up to over-react to the market’s sudden movements. Let's talk about perspectives:

With these perspectives, we think one should accept that certain periods will have negative returns or losses if one is to succeed as an investor. They are an inevitable part of a long but mostly upward journey. Markets go up over time because businesses make progress and that increases their intrinsic value.