Climbing the proverbial wall of worry

Stock markets around the world continue to climb the proverbial “wall of worry”, reaching 10,000 for the popular Dow Jones Industrial Index. A plethora of financial analysts and market gurus warn of an impending nasty correction because the market has gone up too far too fast.

In order to understand this year’s year-to-date performance, it is useful to look back at 2008 for some perspectives:

2008 was marked by what a legendary value investor calls “the universality of Catastrophic Markets”. He defines a Catastrophic Market as one where prices decline dramatically for virtually all assets classes without fear or favor. In the management of investors’ portfolios, we must treat these events as seldom-recurring ones. Over the last 90 years, they happened in 1929 -1932, 1937, 1974, briefly in 1987 and 2007-2008. 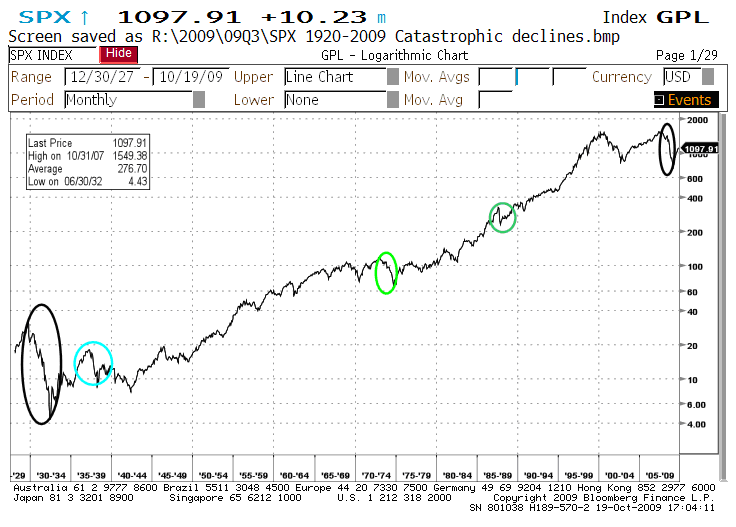 No one can make sound investment decisions if he or she assumes that catastrophic general market declines are just around the corner. As portfolio managers, we can only make decisions based on reasonable worst case scenarios.

Unfortunately, it is next to impossible for us to accurately predict these Catastrophic Markets events and we doubt anybody else can either. As an observation through market history, every bear market has been predicted by a guru but the same one never predicted two in a row. That is what we call random in statistics.

However, the rebounds after these over-the-cliff declines have been nothing short of spectacular and the one we are living right now is no exception. It would be a huge mistake to sell out at the panic lows and not participate in the recovery.

Yet, that is what most people would do if they paid too much attention to the media reports. We know we have said this before but it is worth repeating here: the media’s objective is to sell news, especially “hot” news, those that appeal to our emotions. Otherwise, we would not pay for them. Investors’ behavior can be best described as bipolar. Our emotion span moves from fear to greed as markets move up and from greed to fear as markets decline. However, at inflection points, this emotional shift happens at lightning speed. That explains investors’ euphoric buying frenzies at market peaks and their panic selling at market bottoms. Unfortunately, there is no cure for this psychological flaw and to overcome this enemy from within, planning and structure, i.e. discipline to stick with a proven strategy (and there are lots of them) are essential for investment success.

Those of you who have been in the market for more than 25 years would remember October 19th, 1987 (Black Monday). Ironically, the same day I’m writing this letter:

Yet, 22 years later, the investment industry has thrived; communism basically has retreated to be a theoretical doctrine; China has embraced capitalism openly and has been experiencing spectacular economic growth. Nominal world wide GDP has grown from USD 16.6 trillion to USD 60 trillion, a compounded annual growth rate of 6.3%. As long term investors, we need to have long term perspectives and try our best to see the forest and not the trees. For this, we’d like to use October 19th, 1987 as an example of long term perspectives and show you several charts since a picture is worth a thousand words… 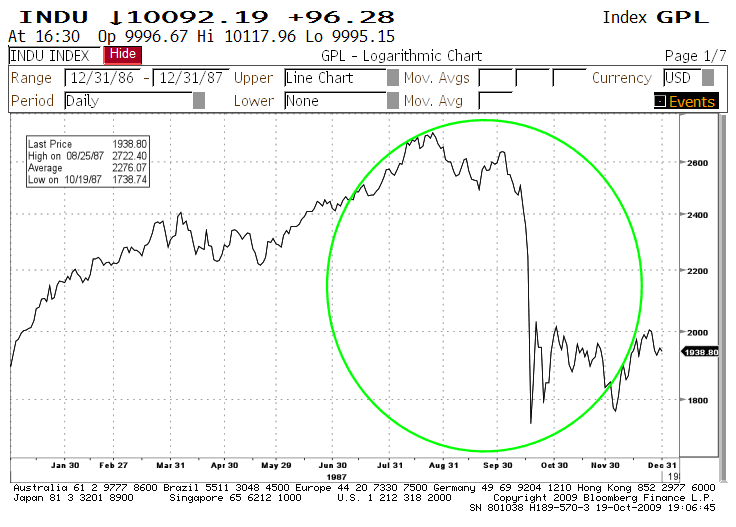 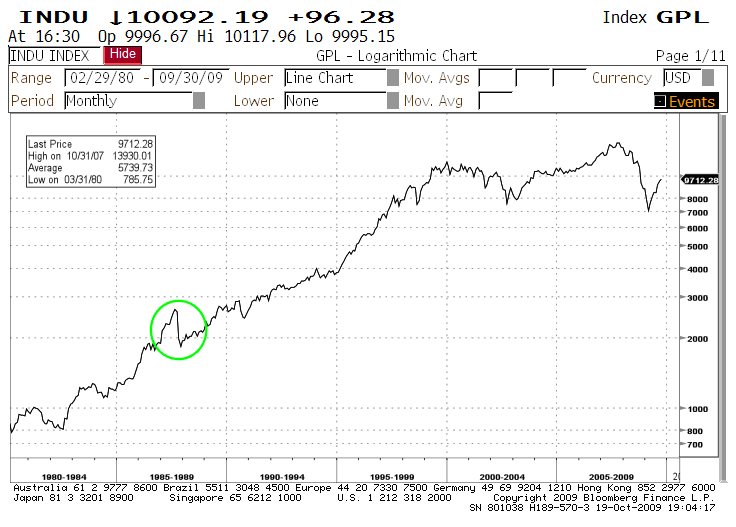 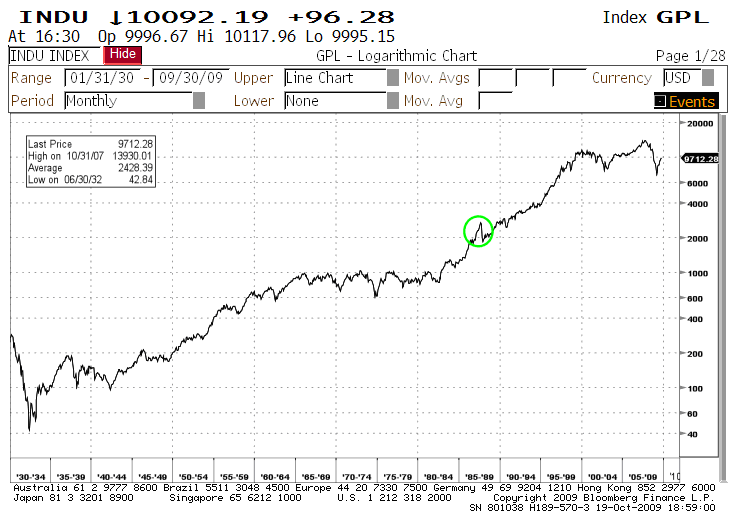 The lesson to be learned here is the resilience of the capitalist system, its capacity to withstand crises and to reinvent itself, as long as governments do what they are supposed to do: create a stable, hospitable environment for economic activities – allowing businesses to prosper, entrepreneurs to take risks and invest in job creation.

Government policies should be devoted to uphold the rule of law, enforce the respect for property rights, promote a pro-growth tax system and ease barriers to doing business.

Most politicians and some economists actually believe that government itself can create wealth. Unfortunately, it cannot. It only redistributes wealth. Basically, the private sector creates wealth that governments take in the form of taxes and then redistributes it in order to “equalize” the economic gap between the haves and have-nots.

We came across a short paragraph written in the middle of the depression that is so profound and appropriate for these economic times that we’d like to share it with you:

"You cannot legislate the poor into prosperity by legislating the wealthy out of prosperity. What one person receives without working for, another person must work for without receiving. The government cannot give to anybody anything that the government does not first take from somebody else. When half of the people get the idea that they do not have to work because the other half is going to take care of them, and when the other half gets the idea that it does no good to work because somebody else is going to get what they work for, that my dear friend, is the beginning of the end of any nation. You cannot multiply wealth by dividing it."

We welcome your thoughts and comments.