Skip to main content
Home>Publications>Reasons to own equities over the long-term, regardless of their inherent volatility

Reasons to own equities over the long-term, regardless of their inherent volatility

Reasons to own equities over the long-term, regardless of their inherent volatility

After a drastic drop that lasted the first 15 days of the quarter, the S&P 500 basically has recovered to finish the quarter flat. However, due to the rebound of the Loonie, the S&P 500 has posted a loss of 5% in Canadian dollar terms. The S&P/TSX fared better, moving up 3% thanks to a rebound on energy and mining sectors. European markets were weak in general, whether currency adjusted or not.

The long term advantage of being in equities

After a tumultuous 12 months where we witnessed financial markets whipsaw with increasing volatility, investors must be wondering whether it is too risky to be exposed to the stock market. They are torn between the safe fixed income vehicles with no return and the volatile equity and equity-like ones that could deliver a decent return.

From a textbook perspective, the stock market’s gains are driven by 3 factors:

Two other factors that investors overlook are by owning shares in companies, they can capture people’s desire to improve themselves and continue to innovate. To paraphrase Eddy Elfendein from “Crossing Wall Street”, equity is the only asset class that captures human ingenuity, which is the ultimate asset.

Since the financial crisis in 2008, many people believe that the market resembles a casino where the odds are stacked against them. Many politicians, sensing people’s mistrust towards Wall Street and Bay Street take advantage of the crisis to impose regulations and increase taxes on the “wealthy”. The reality is that markets and economies are always and forever cyclical. Some of the downturns are just more painful than others.

While human progress is not always apparent over the short term, it does happen over the long term but in fits and starts. Warren Buffett wrote about “productivity and prosperity” in his annual letter this year and we recommend every long term investor read it.

Human ingenuity is the main reason why stocks outperform bonds over the long term.

Investor psychology and how to deal with it

If you have read our quarterly letters over the years, you should know by now that we believe that in order to be successful, an investor has to understand not just finance, accounting and economics, but also psychology.

One of the behavioral traits of the average investor is that he/she tends to swing from high levels of optimism, greed and risk tolerance to pessimism, fear and risk aversion. He/she rarely gives equal weight to both good and bad news and usually is biased by whatever is going on at the moment. 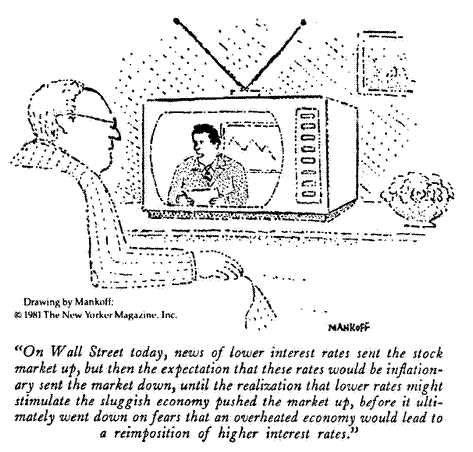 As Howard Marks says: “In the real world, things generally go between “pretty good” to “not so hot”. But in investing, it goes from “flawless” to “hopeless”, nothing in between.

In order to deal with these behaviors, we try to learn to understand these biases, to control our emotional reaction and to think more rationally. Here are a few examples that we can use as case studies so you understand our thinking process:

Although we believe that a repeat of a 2008 crisis is unlikely, a hard landing and substantial devaluation in China could still have far-reaching effects on the world’s financial markets due to what the economist Paul Krugman referred to as “psychological contagion”, the extent to which markets are linked by the investors’ psychology.

The upside and downside of volatility

Our experience has taught us that investors have an asymmetrical view on fluctuations as a risk: when stocks are going up, volatility is never seen as a risk whereas when they are going down, volatility suddenly becomes a risk. The 64 million dollar question is: should volatility be considered as a risk? In the last year or two, we have witnessed higher than average volatility in all financial markets. These violent swings are usually an indication of a lack of liquidity. There are multiple reasons for us to believe that these market conditions are here to stay. Among them:

We would argue that lower liquidity and higher volatility are not necessarily bad. Unfortunately for speculators who need to get in and out of the market often, their costs of doing business have gone up. It would also be unfortunate for investors who suddenly need money or those who panic when markets head south. However, for the patient investor who looks at the long term, downside volatility should be viewed as a great opportunity to find good bargains. Is investment not about buying low and selling high?